South Australia will be the first jurisdiction in the nation to have an Animal Offender Registration List, under an elected Animal Justice Party.

Lead candidate for the Legislative Council, Louise Pfeiffer, said the Animal Justice Party will establish the nation’s first Animal Offender Registration List with convicted offenders on the List restricted from owning or working with animals.

Ms Pfeiffer is also calling for the establishment of an Independent Office of Animal Protection (IOAP) to oversee animal cruelty and abuse related issues.

The IOAP will have oversight of the Animal Offender Registration List and ensure it is made available to breeders, rescue shelters, pet stores, as well as groomers, doggy day care and other animal related industries.

Another key issue to be investigated by the IOAP, is a rehab program for offenders - with research clearly showing there are strong links between perpetrators of animal cruelty and perpetrators of domestic and other forms of violence.

“It’s time to prove South Australians are serious about stopping animal cruelty. By voting for the Animal Justice Party on March 19 you will help to ensure that people who deliberately inflict pain on animals suffer the consequences of their actions, and importantly don’t offend again.”

The Animal Welfare Act 1985 stipulates that the maximum penalty for people convicted of ill- treating an animal face a fine of $50,000 or four years jail.

“However, despite the best efforts of the RSPCA, some offenders receive minimal fines and no jail time. Or, in some cases, no penalty at all,” Ms Pfeiffer said.

South Australian Clinical Psychologist, Dr Rachel Samson, said animal cruelty is s major social issue with research revealing there is a strong relationship between violence against animals and violence towards people, including family violence, child abuse, and other antisocial behaviours.

"Animal cruelty is, in its own right, a source of concern for the wider community and a very serious concern because of the link between animal cruelty and family violence," Dr Samson said.

"What the research tells us is that in homes where animal cruelty has occurred, there is an increased likelihood that other forms of family violence may occur. Those who perpetrate violence rarely limit their violence towards one species.

"By identifying and registering individuals with a propensity for perpetrating violence and other forms of cruelty, we may be better positioned to identify families at risk of family violence, which in turn, would assist us to develop intervention programmes to address this complex web of violence.”

“I have received overwhelming feedback from pet owners across the state who told me that if they had assistance paying their vet bills their beloved pets would still be alive today.” 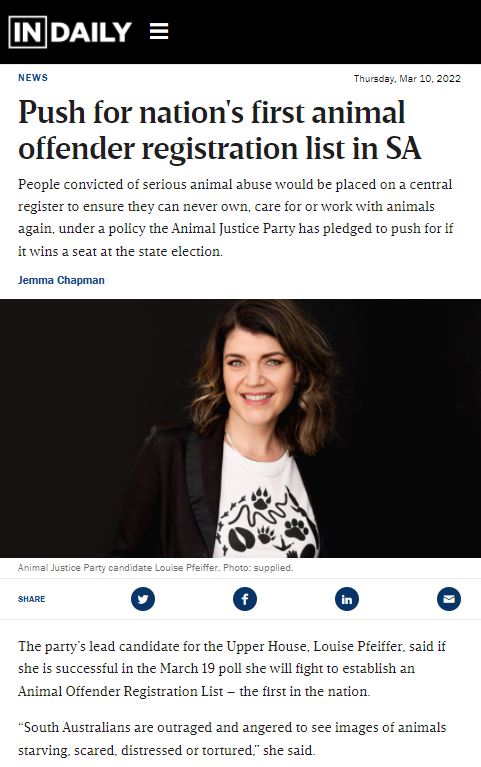