South Australia’s low income households will receive subsidised vet care to prevent the unnecessary suffering or death of their pets, if the Animal Justice Party is elected at the upcoming state election.

The policy – which is the first of its kind in Australia – has been announced by the Animal Justice Party’s lead candidate for the Legislative Council, Louise Pfeiffer.

“This can lead to devastating consequences for their pets. This can also mean pets don’t receive the care they need, or face death for an injury that is easily treatable,” she said.

“The special bond between a pet and a human is powerful.  For many people, pets are their lifeline and, in some cases, their only companion.

“If elected in 2022, the Animal Justice Party will ensure that low-income earners will never have to choose between paying for their pet’s care, or putting food on their own table.”

The policy is supported by South Australian veterinarian, Dr Alejandra Arbe Montoya, who said there is also an emotional toll on vets when they have to euthanise animals purely based on financial grounds.

“Having a vet where clients that cannot afford vet care can be referred to, would alleviate that emotional toll while ensuring pets get the care they need,” Dr Arbe Montoya said.

Ms Pfeiffer said it will be her immediate priority to lobby and work with members of the newly-elected Parliament to establish affordable vet clinics which offer at-cost services, or payment plans, depending on what each pet-owner can afford.

One of the options currently being considered by the AJP in order to fund the policy is a tax on the state’s puppy breeders.

“The AJP is also calling for greater scrutiny of puppy mills in South Australia. It is proposed that a tax on these businesses could help to fund the affordable vet care policy,” Ms Pfeiffer added. 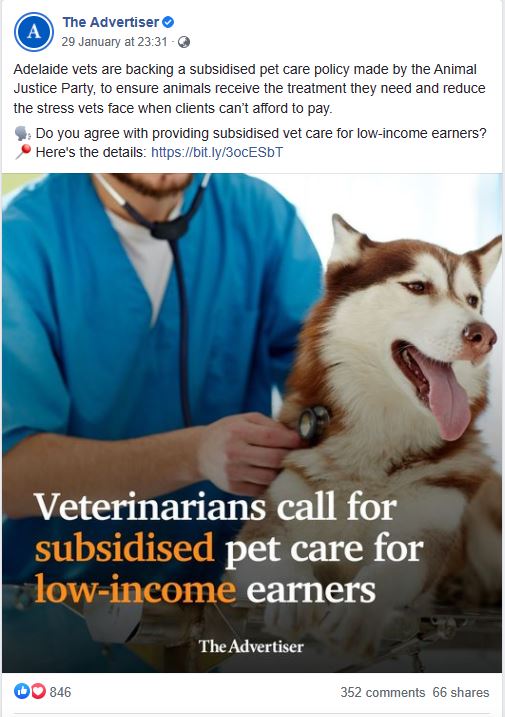